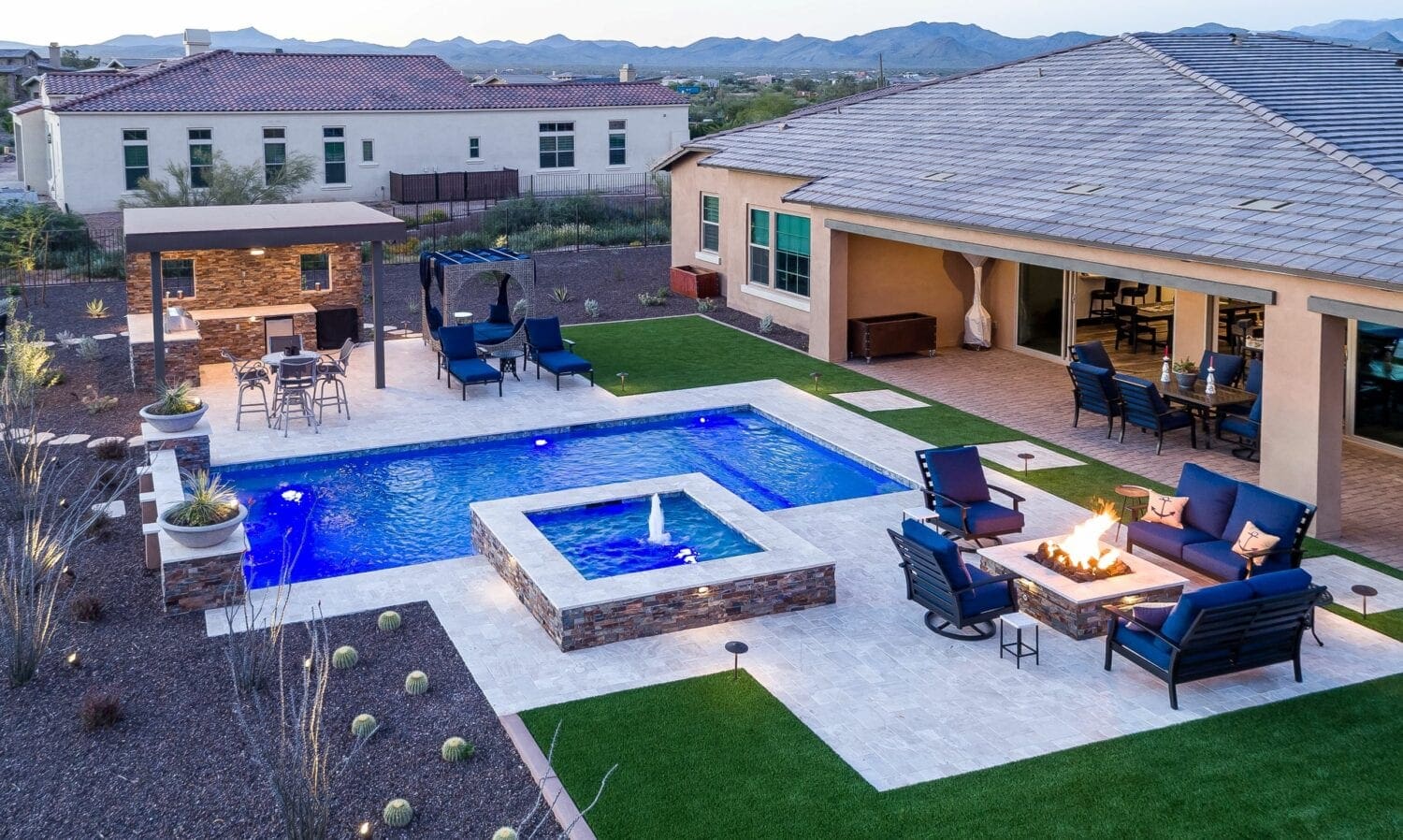 Our designers at California Pools & Landscape are true pros. They have garnered the experience over the years to truly see a backyard in its entirety, anticipate challenges, and optimize spaces for maximum enjoyment. In this spectacular example, designer Aaron Heninger worked alongside the discerning McDermott family to create a backyard that would serve as a natural extension of their home. They worked together to create functional outdoor spaces that would serve as independent entertainment areas – creating a backyard that epitomizes backyard living at it’s best. We sat down we Aaron to talk about his process, and learn a little more about what goes into creating a jaw-dropping CP&L ultimate backyard. 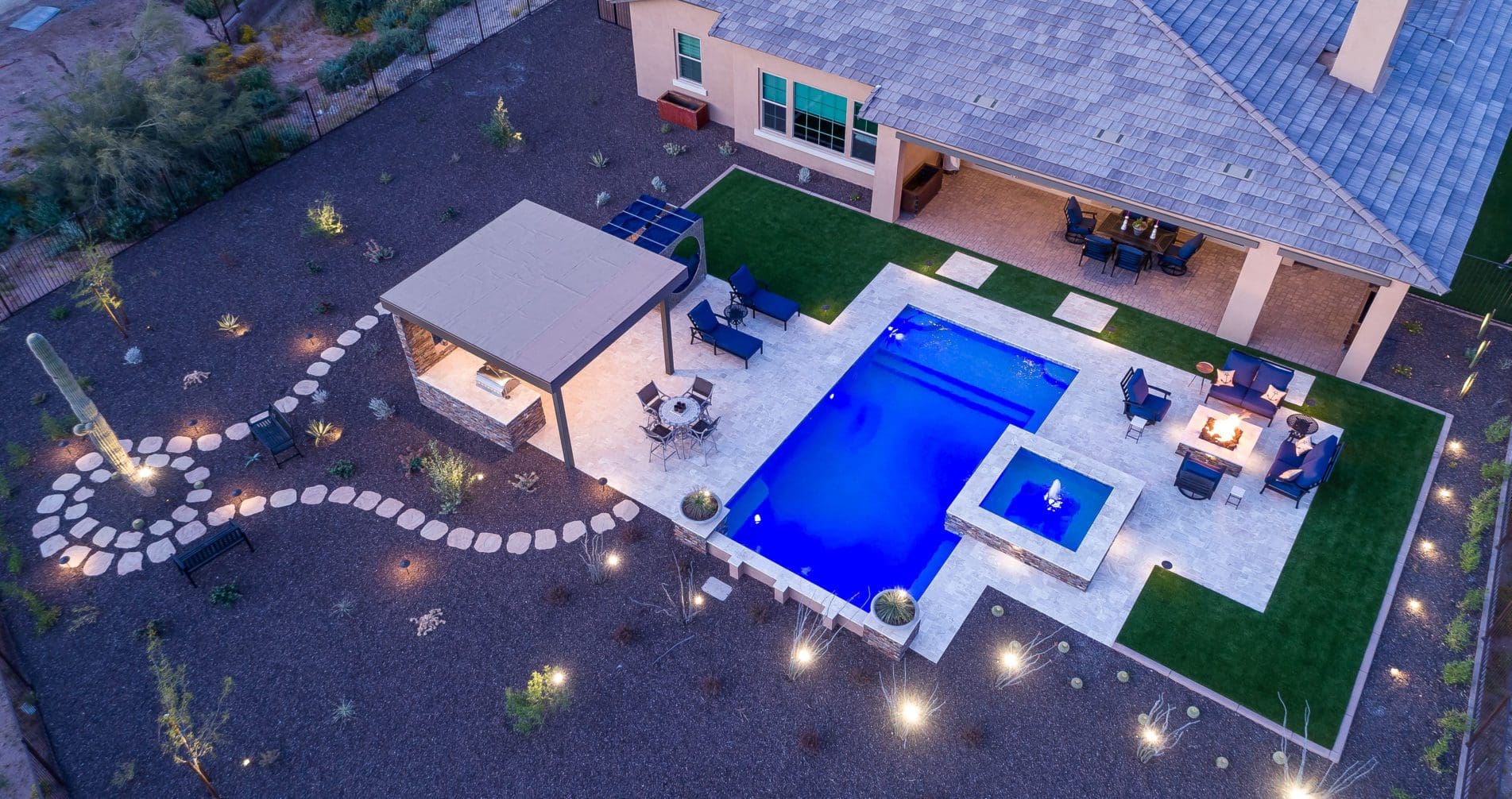 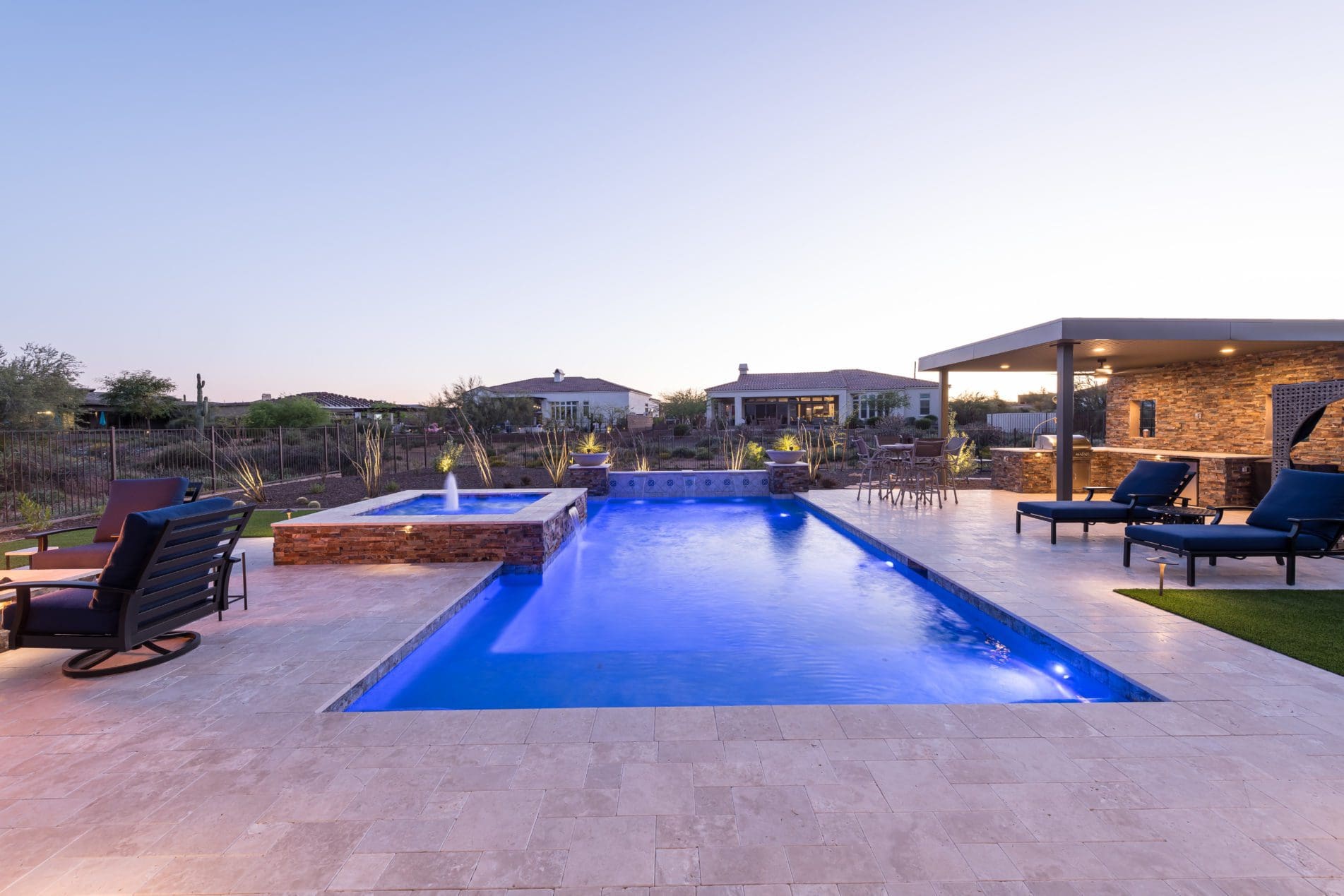 The McDermott family – like many others – wanted to create a backyard space that would be prime for relaxation and entertainment and maximize the square footage of their property. Aaron explains: “One of the key things the McDermotts wanted was to have the full indoor/outdoor living experience, as most people do. Their primary goal was to capture that symmetrical view from their home’s large, paneled glass wall. That’s why we oriented the pool running away from them, instead of doing the traditional wide orientation. By doing that, it really adds that sense of depth in their large yard. It also gives them the widest body of water for visible purposes – so when they look out, they see a long, very deep look. So that was really the anchor point of how I began the design. 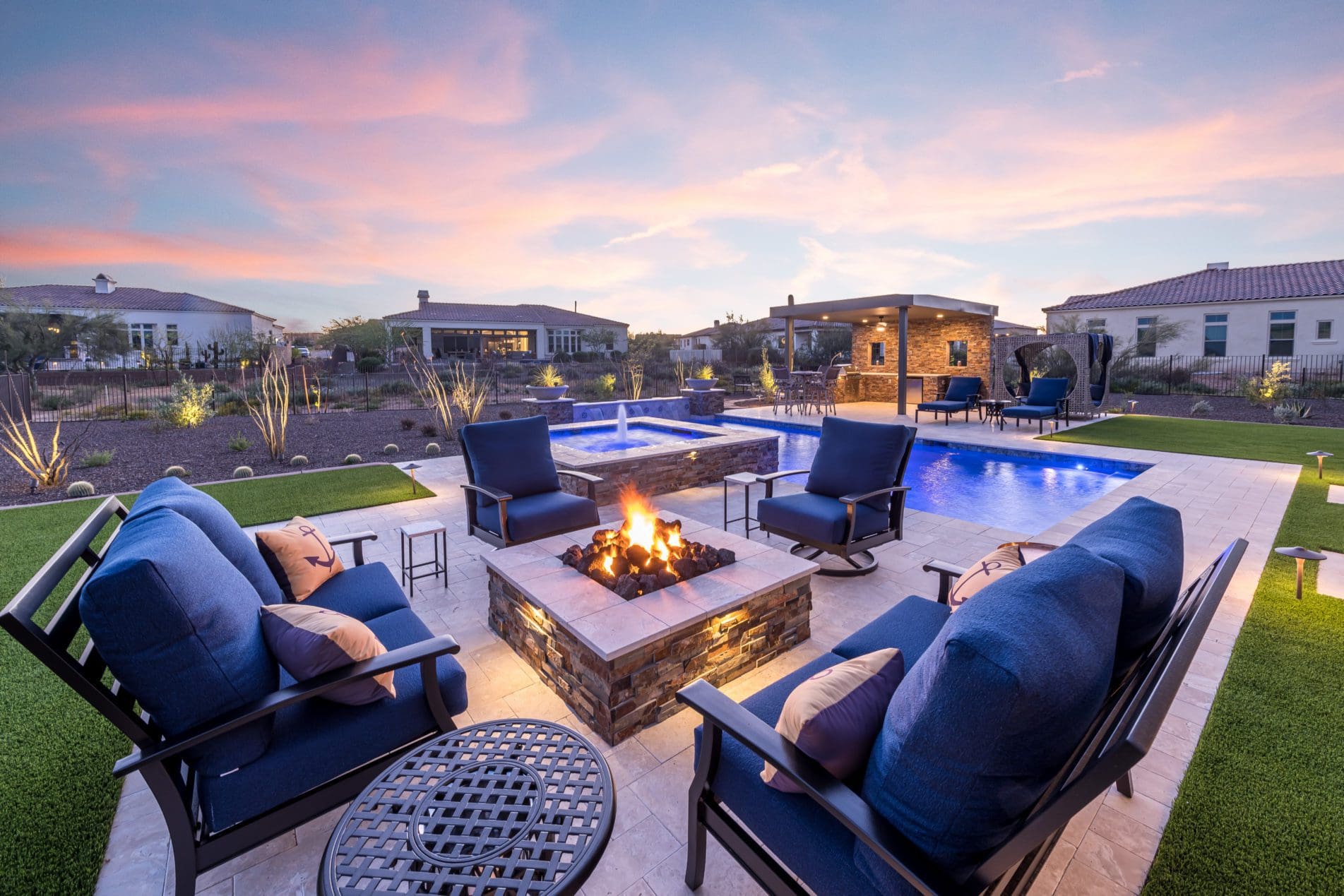 After designing the pool’s perfect placement, Aaron turned his attention to other key elements to suit the McDermott’s lifestyle. Of course in Arizona, a well-placed shade structure is essential. “We give a lot of thought to the sun’s movement when planning shade structures,” Aaron says. “I’m always trying to place that shade structure on the side that is going to create the most shade as the afternoon progresses. If you think about the traditional walled backyard, if that ramada was put on the furthest side of the yard, when the sun comes up, all you would do is shade the wall and possibly your neighbor’s backyard. So I always try to orient so that shade stays in their yard, in a functional place. On the McDermott’s, I expanded the deck to capture the shade as the afternoon went on.” 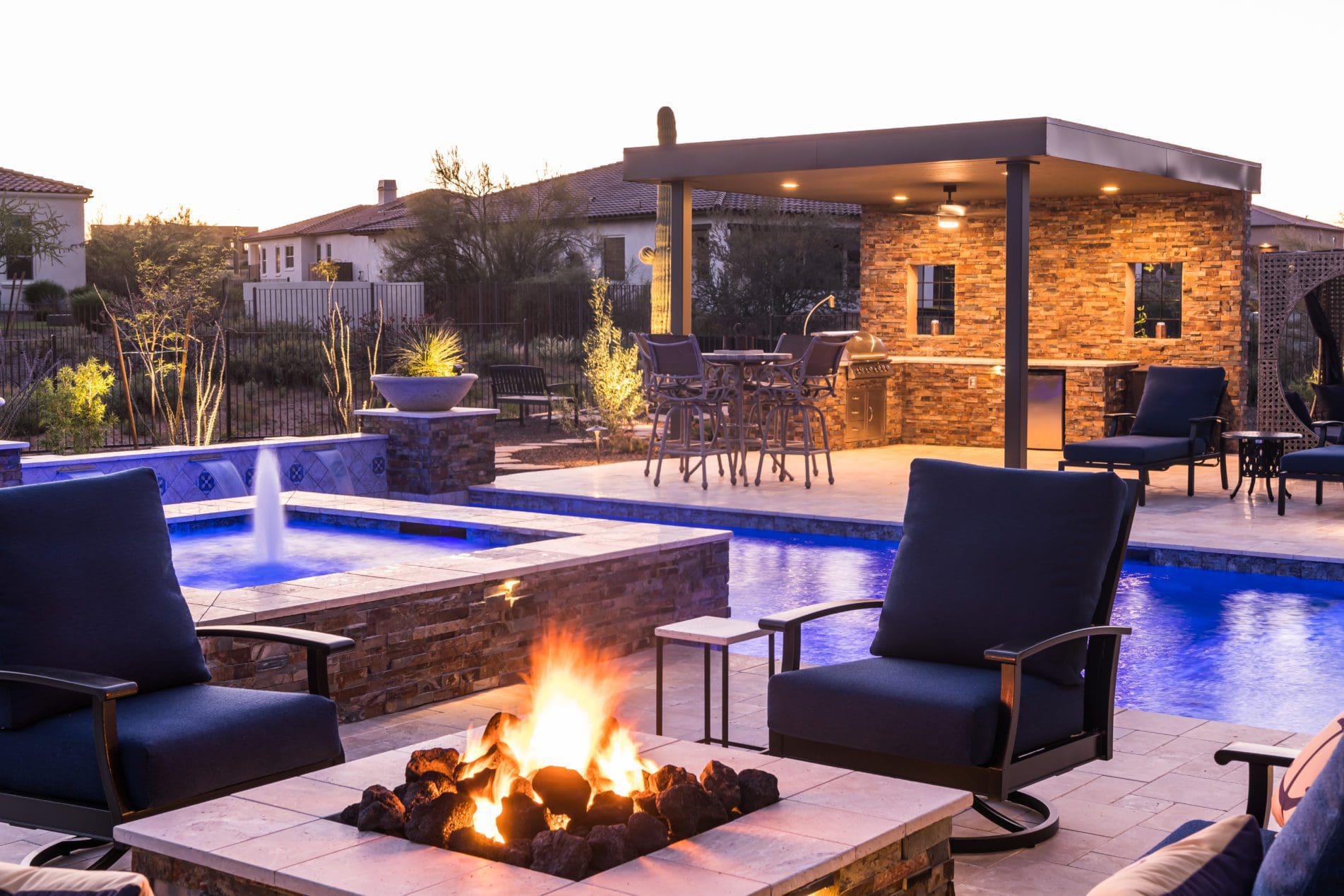 Entertaining is all about ease and comfort. In the right space, people want to stay forever! Our designers give much thought to creating outdoor spaces that are inviting, beautiful, and functional. Aaron describes his thinking when planning spas and firepits: “I think of the spa and firepit as being an outdoor, nighttime experience. A cold room, if you will. They are both used at the same time—when it’s cold and in the winter. The first thing I always ask clients is how they entertain—the number of people they have over, how diverse the groups are, if they have separate rooms where they entertain or if they all stay together in a more intimate setting. Most of the time, people prefer to keep it intimate; just a few friends coming over. That generally means they don’t want to separate the areas and functional spaces. This design is a perfect example of how we think about outdoor meeting spaces. In my designs, I like to keep the spa and firepit near each other. I have a pool and spa in my own backyard. And if we have a few couples over, I don’t last that long in the spa. My wife likes it at about 100 degrees. I’m Canadian and don’t last that long in that kind of temperature! Usually after about ten minutes, I’m sitting up on the edge of the spa, and maybe ten minutes later, I’m going and sitting at the firepit area. But I don’t have to say goodbye to those in the spa, still enjoying that hot water—I’m still part of the conversation, I’m still connected with them. I’m just sitting by the firepit and still chatting. After a few minutes, one of my buddies might get out and join me. After a few more minutes I might get a little chilly and jump in the spa for a few more minutes. And that is kind of the flow of the evening – going back and forth. And when I explain it to clients that way, they usually get it instantly. The McDermotts are a great example of that outdoor, nighttime living. We look at that spa and firepit as if it is a room.” 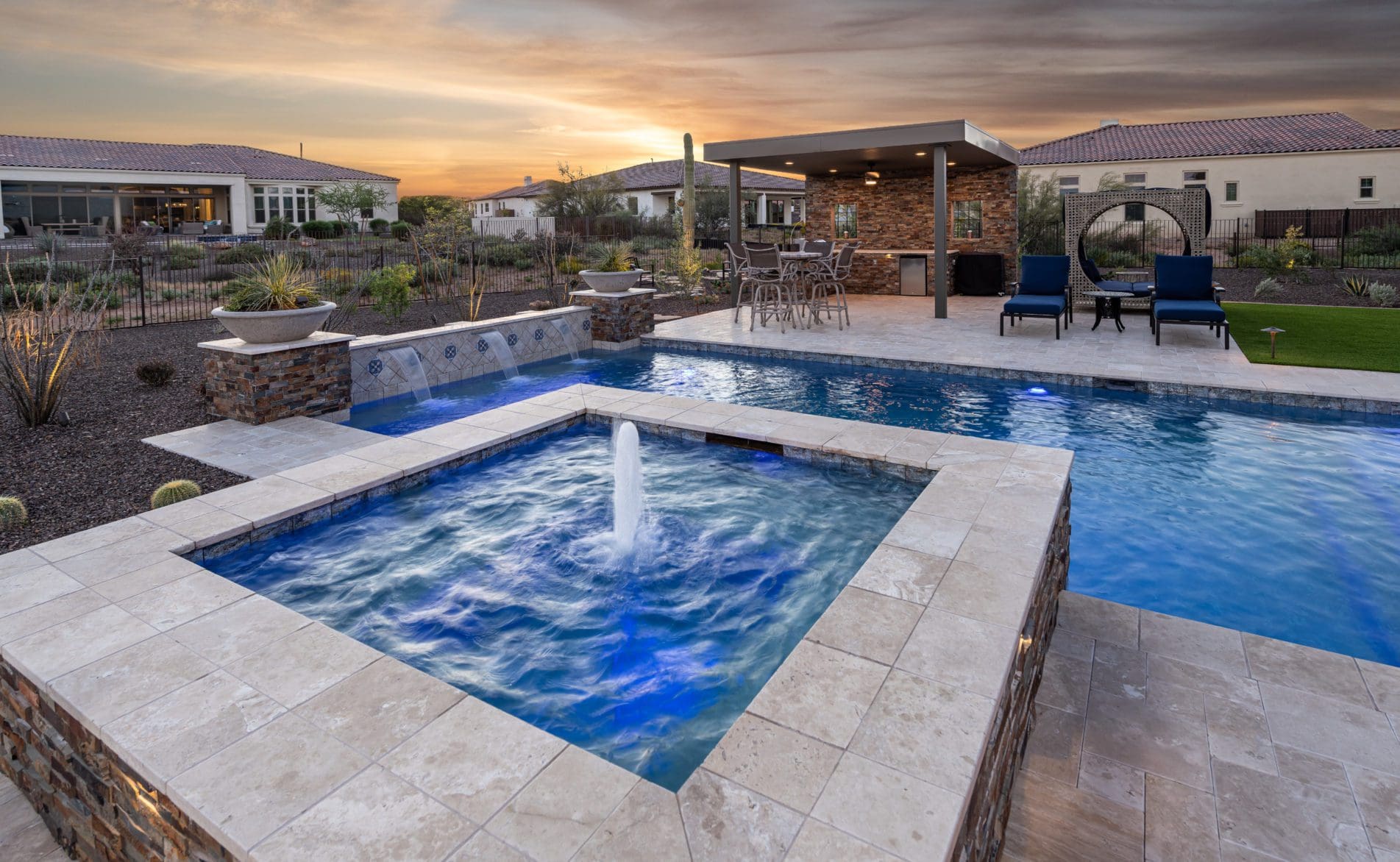 When thinking about functional backyards and spaces that are both beautiful and practical, our designers also consider sun and shade. Aaron explains: “During the day when it’s hot, we want that to be an area we collectively gather around. And if people wanted a sun bathing area, I usually connect those to baja shelves and the pool, because those are going to be used very much at the same time as well.”

Aaron expands on why each backyard built by California Pools & Landscape is completely custom to the homeowners’ personality and lifestyle:

“We look at the activities going on. Sometimes I get clients that entertain huge groups; they have 40 or 50 people over, and they really do like having separate areas – and in that case, of course, we aren’t opposed to having a firepit that is really independent of the spa, or sun area that is independent of the baja area, but those are few and far between; most want to keep those areas connected, and that’s what I did with the McDermotts.”

Another unique feature of the McDermott backyard was the walking path. Aaron and team created a botanical retreat area around a big, existing saguaro, and the family added a lovely seating area around it. Aaron describes it: “I tucked the botanical retreat area behind the ramada. We used informal step paths to meander through and go around the saguaro and to create a meditation garden area, or place someone could go read a book when it’s not very hot. I like creating little bits of mystery in design when I have the opportunity. This is what I consider a hidden gem – when people come in the backyard, they don’t expect to see it. They round the corner, or look over the barbeque and see these step paths leading off…and next they are exploring a part of the yard they never would have gone to.

A final mention-worthy feature involves the spa. Aaron describes one of the interesting ways his experience and foresight influence his design decisions. In the McDermott backyard, he added a bridge over the spa’s spillway. He explains his thinking: “Naturally, birds love to come and land in the spillway—the traditional area where the spa spills into the pool. They love it. There is a thin layer of water they can stand in, take a bath, or have a drink. All of that sounds very natural, but they leave their “evidence” behind. When I’m working in open desert preserve areas, near mountains or in open areas, or when we know there will be a lot of desire from birds or wildlife for this water, putting that bridge over that spillway prevents the birds from landing there. On the McDermott’s, we put a copper spillway that looks really great and solves this problem.”

The McDermott backyard was a lovely example of creating an outdoor living space that would truly enhance their quality of life, down to the smallest detail!

Thanks, Aaron, for sharing your process with us.

Get in touch today to make your backyard oasis a reality!

Arizona’s ultimate backyard builder is expanding! California Pools & Landscape is coming to Queen Creek – come see what all the hype is about! With over 34 years in business, our team has the experience and expertise to make your backyard dreams come true.

We’re so excited, that we’re throwing a month-long sales event with exclusive specials to celebrate the opening of our new Queen Creek Design Center! In-person and video consultations are available. We are honored to be a part of the beautiful Queen Creek community and look forward to growing together. There has never been a better time to get your yard staycation ready!

Already have a California Pools & Landscape backyard but know someone who needs one… perhaps in Queen Creek? Our referral program gives $250 for the first referral and $500 for each subsequent referral after that. Call us for more info. 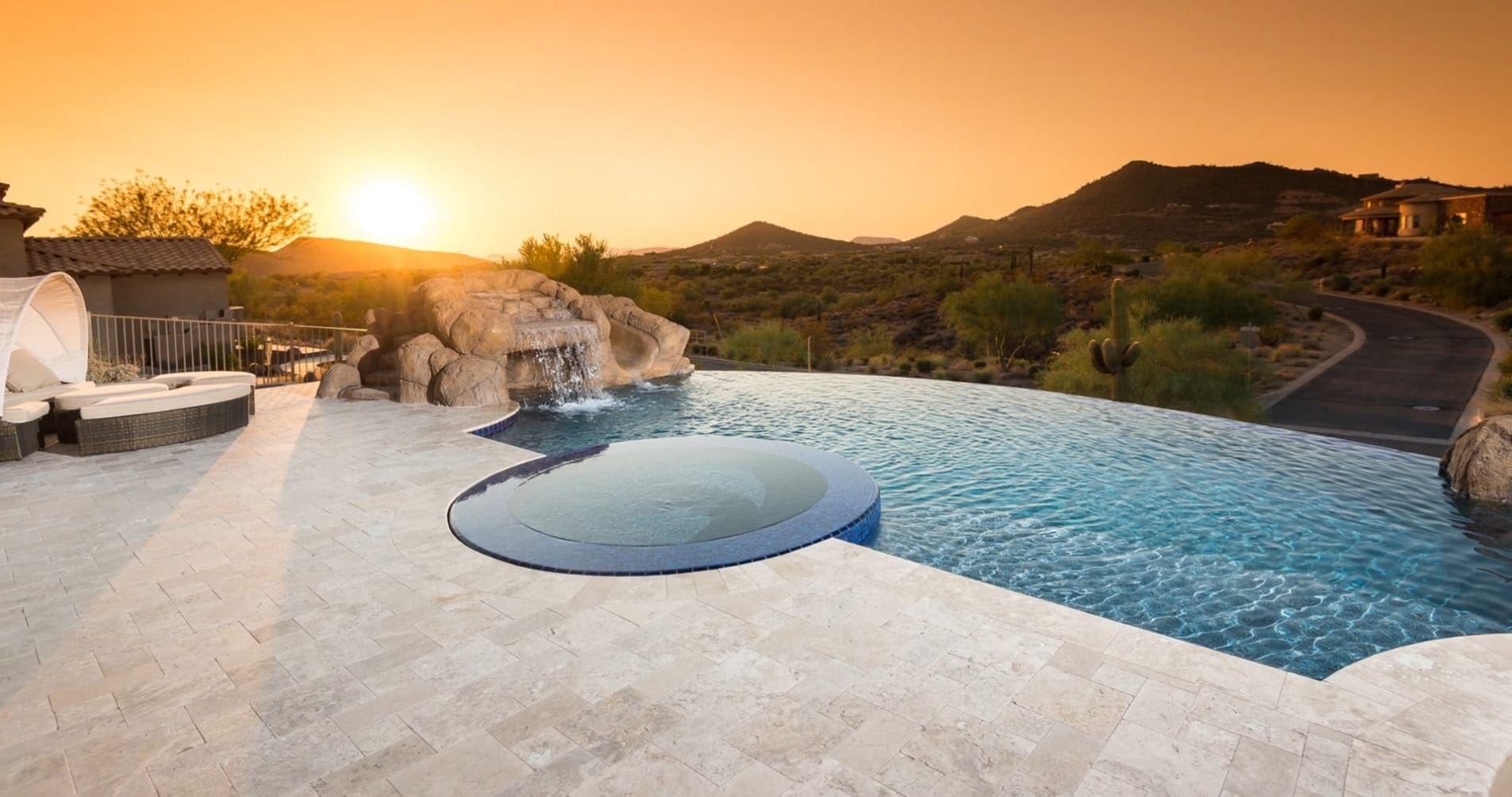